How can interoperability for EV roaming best be achieved and what does an ‘ideal’ protocol look like? The Eindhoven University of Technology (TUe) explored these questions by analysing the four main protocols in Europe: the Open Clearing House Protocol (OCHP), the Open InterCharge Protocol (OICP), the eMobility Inter-Operation Protocol (eMIP), and the Open Charge Point Interface (OCPI). The results have now been published in a three-part report.

The report is based on a combination of desk research and stakeholder interviews and divided into:

Comparative analysis
The similarities and differences between the protocols have been analysed in detail on governance, functionalities, data exchange characteristics and supported charge point information fields. With regard to governance, the protocols have been evaluated using the six conditions of the World Trade Organization Comittee on Technical Barriers to Trade for open international standardization: transparency; openness; impartiality and consensus; effectiveness and relevance; coherence; development dimension.

The summary of similarities and differences between the roaming protocols looks like this:

Future perspectives
The study shows that there is still uncertainty about what the future will bring for interoperability: for instance whether protocol developers move to cooperation or competition, what kind of EU regulations will be put in place and what external trends in the EV market will influence the likeness of the scenarios.

Ideal protocol
Based on these perspectives, the researchers conclude that there is a high need to achieve seamless (cross-border) roaming, but there is also a need for a flexible protocol that is able to incorporate new, unforeseen protocol functionalities. To accommodate both needs, they propose that an ‘ideal’ should be based on seven design principles:

How the four most important protocols score on these criteria can be seen in this overview:

This research was carried out as part of the evRoaming4EU project. The project had two distinct goals: maximizing interoperability of the EV charging market and maximizing adoption of a harmonized EV charging protocol. 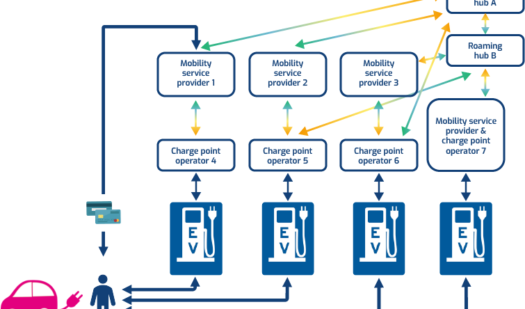