The new Open Charging Network (OCN) allows parties within the open protocol OCPI to easily establish a connection with each other. This opens new possibilities and can for instance help accelerate smart charging and instant payment. The first testing phase has been successful. Christopher Burgahn, Head of Product at initiator Share&Charge, explains how OCN works and takes a look toward the future.

Why this concept?
“We are now entering the electric vehicle mass market and therefore it is a perfect moment in time to think about and to develop a future-proof digital infrastructure in EV charging. We want to help accelerate the adoption of electric vehicles by making ev-roaming cheaper and by creating a communication layer, which is the basis for great and innovative services for eMSPs and CPOs.”

What is the most important aspect of the OCN Node?
“It is a commonly shared infrastructure for the OCPI protocol, which allows everybody to easily establish an OCPI connection to everyone. We believe that something like this is necessary to combine the advantages of OCPI as a protocol layer with the efficiency of ev-roaming hubs (cost-efficiency, security, same interpretation of OCPI, etc.).”

Why was OCPI important in the development of OCN?
“We believe that community-driven and open technology must be the basis of the digital infrastructure in EV charging. OCPI is by far the most community-driven and adopted P2P ev-roaming standard, that is why we made the decision for OCPI.”

How do OCPI and OCN strengthen each other?
“The OCN is built 100% on OCPI and is therefore reliant on the continuous development of OCPI. In return, the OCN can help to overcome the hassle of individual P2P set-up and maintenance of OCPI. With this we hope the OCN drives global OCPI adoption. Furthermore, the OCN helps to streamline OCPI implementations, which is still a huge challenge, as the standard can be interpreted differently and therefore implemented in completely different ways. “

How will OCN evolve?
“We are now having the first parties preparing to shift to the OCN and our focus is to support them. In the next step we, and hopefully the community, will further refine the OCN. Here the open source approach helps, as we already see the first contributions to the code by others.
In addition, we invite companies to offer services on top of the OCN like payment, contracting and smart charging.”

How many parties are now working with or testing OCN Nodes?
“We had a very successful testing phase with ElaadNL and Innogy eMobility Solutions is currently also linked to the OCN. Some other pilots are taking place right now.
We estimate currently 10 companies to actively work with the OCN and expect some major announcements this summer. We have received great feedback so far and hear that many companies will join once they are OCPI 2.2. compliant, which will also be adopted more and more in course of the next six months.
Currently we have members and active companies in the UK, Germany, Netherlands, Switzerland, Austria and France.”

What did surprise you in this stage of testing and implementation?
“Some unexpected feedback that we got from various parties is that the advantage of streamlining the OCPI implementations is highly valuable. We did not think about this in the first place when building the OCN, but parties connected to the OCN should not have any more interpretation hassle as you must follow the OCPI implementation of the OCN Node in order to connect. This is a nice side effect that we will focus on further in the coming months.”

How can OCN and OCPI help accelerate the rise of smart charging?
“We are convinced OCPI is the right standard for smart charging as it is anyhow integrated with many companies. A lot of smart charging and V2G pilots often die after the pilot because of complexity and integration efforts. OCPI has the huge potential to also support smart charging beyond one CPO and eMSP.”

When and how will the EV driver notice a difference in charging experience?
“We are confident that with the OCN there won’t be any more cases of drivers not being able to charge at their preferred charging stations. In addition to that, innovative solutions like instant payment and smart charging will be implemented sooner as everyone can freely build solutions on top of the OCN. We always compare that to the development of the internet, where an open infrastructure allowed an explosion of innovations. Soon, EV drivers will gain the huge benefits out of those innovations. “

Could you explain what makes OCN secure?
“With the OCN a public-private key infrastructure is applied to OCPI messages, inspired by the blockchain community. With that every OCPI message has a proof-of-origin. For example: a CPO can prove that it received a certain message, like a ‘start charging’ command by the eMSP. This just makes OCPI connections more secure and trustworthy. An additional benefit this brings, is that every party on the OCN has a digital identity (the OCN Identity), which allows future use-cases like instant payment or tracking of energy certificates for green charging can be combined with OCPI connections easily.”

The ECISS project recently presented an architecture diagram. Where do you position OCN in this picture?
“We very much like this diagram, as it helps to understand the necessary infrastructure to facilitate any charging use-case. In the first place, the OCN can just be put where the ev-roaming hubs are positioned now. However, we believe that wherever multiple parties need to communicate with each other, a concept like the OCN has tremendous benefits for every party involved. Let’s see what direction the community steers the OCN towards, we are looking forward to it.” 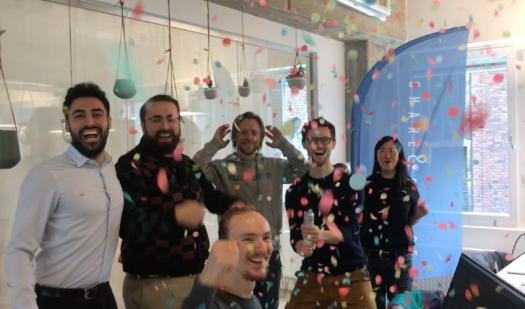